As published by CAA Québec.

If you’ve ever had a problem with a burst pipe, you know just how much water pressure is involved and, especially, how much damage can result. There’s a solution: install a system that will detect leaks and shut off the water supply when necessary. This can considerably reduce the risk of water damage from burst pipes or other leaks in a home—damage that, according to the Chambre de l’assurance de dommages, accounts for approximately 40% of insurance claims for water damage each year. It is also true, however, that people often react quickly in such situations, meaning that disaster scenarios are fairly rare. And as long as plumbing has been installed to code, appliances are used properly, and regular maintenance is performed, this also reduces the risks. 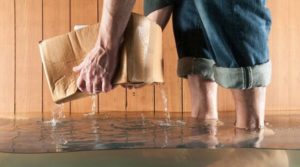 How do leak detectors work?
Water leak detectors are installed next to tubs and toilets as well as appliances connected to plumbing (e.g., water heater, dishwasher). If one of them senses water leaking onto the floor, it sends a signal to the main system module, which in turn commands shutoff of an electric valve installed on the house’s water inlet pipe. Some of these systems are “smart,” communicating directly with your phone to notify you of the exact time and location of a leak—and tell you that it is now under control. Also good to know: the electric shutoff valve has battery backup, allowing the system to remain operational during a power outage. Obviously, the faster a leak is brought under control, the less damage there will be, and the lower the insurance claim is likely to be. Health risks—related to the onset of mould, for example—are also minimized. Once the danger is past, you simply reopen the valve manually.

Double detection and protection
A low-temperature sensor can be added to the system to monitor a specific location; for example, a pipe that is prone to freezing in very cold temperatures. This sensor can also send a water-shutoff signal if there is a risk of frozen pipes.

What about installation ?
You can install a leak detection system yourself, or have the job done by an intercommunications, telephone and surveillance contractor (i.e., an alarm technician). You’re better off entrusting the electric valve installation to a plumber, however.

Lower insurance premium
As with an alarm system, having a plumbing leak detection and control system installed will usually entitle you to a lower home insurance premium. This is an especially good idea for condo managers: water damage in these buildings may affect several properties at once, leading to a large number of claims and, in turn, higher premiums.

Frequent claims
According to the Insurance Bureau of Canada, water damage accounts for about half of all home insurance claims filed in Quebec, ahead of those for fire and theft.

Our thanks to Patrick Lavoie of Inflotrolix for his contribution to this instalment of Tips & Tricks.